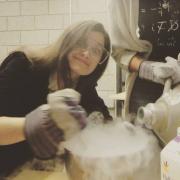 Bárbara is an intensive track physics major at Yale. Originally from Brazil, she fell in love with physics in high school, when she participated in Olympiads and represented her native country a couple of times at an international physics competition. She previously worked at CERN in Professor Sarah Demers’ group and currently does research in AMO in Professor David DeMille’s lab. She joined WiP in her sophomore year to help the APS CUWiP 2015 organization. She is also an undergrad representative in the Yale Physics Department Climate and Diversity Committee. When she is not doing physics, she likes to play her guitar, travel, have meaningful conversations with other Yalies and hang out at Global Grounds (there’re free brownies and cookies there!) and at the CEID. 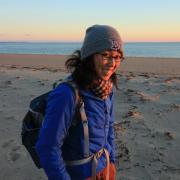 Grace is an intensive physics major who hails from the most biodiverse state in the US: California. She has spent many of her educational days in various condensed-matter physics laboratories, working on everything from building furnaces to taking milliKelvin temperature measurements in graphene to growing tiny oxide materials in giant bell jars. She was part of the conference coordinating team for the 2015 CUWiP meeting at Yale and now serves as an undergraduate representative in the Climate and Diversity Committee (the smaller and less virulent of the two CDCs, alas). When she’s not wrestling with physics, Grace the SNL junkie can be found hiking and birdwatching in the mountains, binding books, or writing poetry that should never see the light of day. 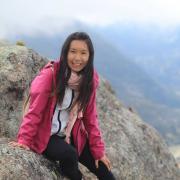 Carolyn was wooed into physics after her freshman year by superconductivity, and wooed into WiP by her awesome friends on the board. She is a physics major in the intensive track at Yale. She has conducted research in experimental condensed matter at NIST in Gaithersburg, MD and with Prof. Charles Ahn’s group at Yale.  This semester, she is working at the Max Planck Institute for the Physics of Complex Systems in Dresden, Germany, doing theoretical condensed matter research on many-body localization.  Outside of physics, she enjoys hiking and running in pretty places, procrastinating on YouTube, shopping (too much…), skating, playing piano, bouldering, and chatting with friends over one of her six cups of coffee a day. 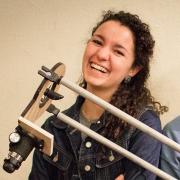 Lauren is an astrophysics major who is in love with black holes, gravitational waves, and anything relativistic. She is currently working with Professor Reina Maruyama on the DM-Ice dark matter search in Antarctica, though in the past she worked at NASA Goddard and at Jefferson Lab. Lauren is also double-majoring in African American Studies, where she hopes to study the relationship between a scientist’s identity and their scientific work. She also first got involved with Women in Physics as a sophomore to help with the 2015 APS CUWiP, and is an undergraduate member of the Yale physics department’s Climate and Diversity Committee. In her free time, Lauren likes buying new earrings, taking long walks on the beach, and posing for pictures with homemade telescopes. 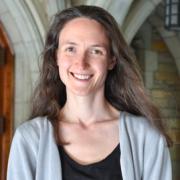 Professor Sarah Demers focuses her research on using tau leptons to study physics beyond the standard model at CERN’s Large Hadron Collider. She went to Harvard as an undergrad and got her Ph.D. at the University of Rochester. She taught at Roberts Wesleyan College and served as a research associate at SLAC National Accelerator Laboratory at Stanford University before joining the Yale faculty in 2009 as assistant professor of physics. She is a co-founder of the Yale Franke and Whitney Humanities Center group “Interdisciplinary Arts and Science Research”. She has been the faculty advisor of Women in Physics since the organization’s foundation. Professor Demers is very active helping the group’s activities and is an inspiration for young women in physics at Yale and beyond. 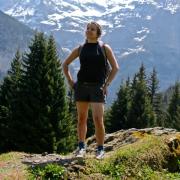 Danielle is a Ph.D. student in the Yale physics department studying the oscillations of neutrinos emitted from nuclear reactors. She graduated from Penn State University receiving a B.S. in Physics and a B.A. in Philosophy, conducting her undergraduate research on the development of semiconductors for photovoltaic applications. Her interests changed to particle physics after an impulsive trip to CERN while studying abroad in Amsterdam. At Yale, she is a collaborator on the PROSPECT experiment and serves as a graduate representative on the Climate and Diversity Committee. When she’s not in the lab tinkering with detectors, Danielle spends most of her time thinking about how to make vegetarian food that even meat-eaters will love, rock climbing, and dreaming about dogs. 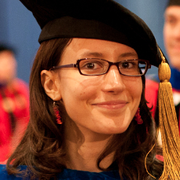 Claudia grew up in Milan, Northern Italy, enjoying both the city life and the proximity to the Alps. She got her Bachelor and Master in physics from University of Milan, and her Ph.D. in theoretical condensed matter physics from Boston University. Her thesis focused on out-of-equilibrium aspects of cold quantum gases. At Yale, Claudia does research with Professor Steven Girvin, studying the many-body physics of systems of quantum bits. Claudia’s current position as a Helmsley Teaching Scholar allows her to develop her passion for teaching and education. She is committed to find the optimal recipe to teach physics effectively to a variety of students’ backgrounds and to improve the experience of undergraduate students at Yale in STEM fields.